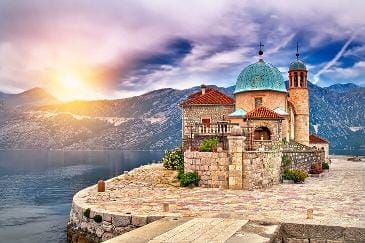 Pick up at the port your journey will start with Sveti Stefan for a phpto break from outside, where was once a small fisherman village, nowadays it is luxurious tourist resort. The first mention of this island is in the middle of 15th century, when Montenegrin tribe of Pastrovici decided to build fortified city to protect their families during tremendous years or attacks of Pirates. The island is connected to the mainland by a narrow isthmus. On both sides of the mainland near the Island, beautiful sandy beach is spread. The island is private property so it can only be photographed from the shore line.

Then, we will drive to Budva, the most famous resort in Montenegro. Budva is considered to be one of the oldest settlements on the Balkan Peninsula. The old town of Budva lies on a little island that was linked to the land by a sandbar and in time turned into a peninsula. It is surrounded by ramparts originating from the XV century including a medieval fortification system with city gates, defense walls and towers. Inside the walls the town is a combination of narrow streets and little squares with valuable monuments of different Mediterranean cultures.

Our next stop will be Perast, a city built by wealthy sea faring families, later becoming a well known artist’s colony. View charming 17th and 18th century architecture and stop in a local museum to learn about the city’s rich history. From there, you  will board a boat for a quick ride across the bay to Our Lady of the RocksChurch.  This man-made Island was built by scuttling old ships and depositing stones around a small crag. According to legend, the islet was made over the centuries by the seamen who kept an ancient oath. Upon returning from each successful voyage, they laid a rock in the bay.

Our last stop will be Kotor where we were met in the morning at port. We will start our Kotr tour with the bustling market and gaze upon graceful baroque buildings. Step inside Cathedral Saint Tryphon to marvel at its vaulted roofs, and see one of Kotor’s most valuable treasures: the silver gilded bas relief altar icon. Constructed in 1166 A.D., then reconstructed following several earthquakes, this cathedral holds a wooden crucifix from 1288 A.D. and golden works spanning from the 14th to the 20th centuries.

Visit the three-story Maritime Museum with its unique collection of historical seafaring objects. On display are photos and models of ships, old instruments, uniforms, and exquisitely decorated weapons. Conclude your tour with a walk along the water or spend some time sightseeing on your own.

This is customizable as it is private

All reservations are subject to terms and conditions of cancellation. No refunds are given regardless of weather on the day of your reserved tour.Tours are non-refundable for any reason including flight delays, ship delays, weather, or any type of incident on the day of tour. Food, Drink or entrance fees not included unless specifically stated.