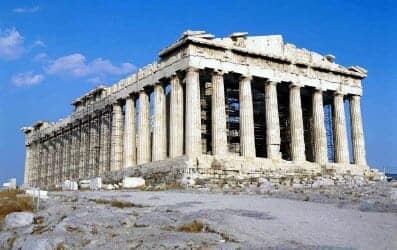 Private tour begins as you board your vehicle at the harbor bustling with brightly painted fishing boats, and drive 30 minutes towards the gateway to Olympia. Along the way, you’ll pass the modern region of Pyrgos and travel through the countryside between the Alfios and Kladeos Rivers. We will drive next to farms with vineyards, watermelons and countless olive groves.

On the way to Olympia, you will have the opportunity to learn all there is, not only about Katakolon and Olympia, but also about the whole region of Ilia. You will be informed about all there is to see in Olympia and you will be given useful tips that will help you make the most of your time.

The archaeological site of Olympia

Ancient Olympia is the archaeological site of the first Olympic Games in 776 BC. It is the site where the Olympic flame is rekindled and carried to the next game’s host site every four years.

In the museum, artifacts from the sanctuary of Olympian Zeus are on display, unearthed in over a century of excavation.: See the famous Hermes of Praxiteles, the statue of Nike, Greek sculptures, armor, and bronze figurines.

Set in a beautiful neo-classical building overlooking Olympia, the building is dedicated to the ancient games.

After an exploration of yesterday, the modern town of Olympia counts on a variety of shops, restaurants and bars. The modern town is so close to the ancient part of Olympia that it can be easily reached on foot. There, you will find everything from jewelry and clothes to arts and crafts.

The tour is not a fixed program as it is private.  If there is something you wish to spend more time visiting that is not an issue.  You will see the entire island.  The driver/guide is very open to staying extra at one site.

Among other places you will visit, Oia village that is a dream for every photographer, and Fira town has a wealth of breathtaking views.

Visit one of the wineries overlooking the volcano to see the beautiful view of Santorini one more time from a different angle .

Stop at the black Sandy beach of Santorini for and swimming and lunch at a waterfront restaurant if you would like.*

After, we will drive to the oldest church on the Island in Mesa Gonia ( Panagia Episkopi ) and  up to the Prophet Elias mountain to see the monastery of Prophet Elias  that it was built in 1800 and the whole  Island from 1000 meters height.

If they wish to skip the beach and visit the archeological sites (tickets not included) of Akrotiri or the museums they can do that.  This is all customizable.

The tour is not a fixed program as it is private.  If there is something you wish to spend more time visiting that is not an issue.  You will see the entire island.  The driver/guide is very open to staying extra at one site. Food or Drink is not included.

All reservations are subject to terms and conditions of cancellation. No refunds are given regardless of weather on the day of your reserved tour.Tours are non-refundable for any reason including flight delays, ship delays, weather, or any type of incident on the day of tour.