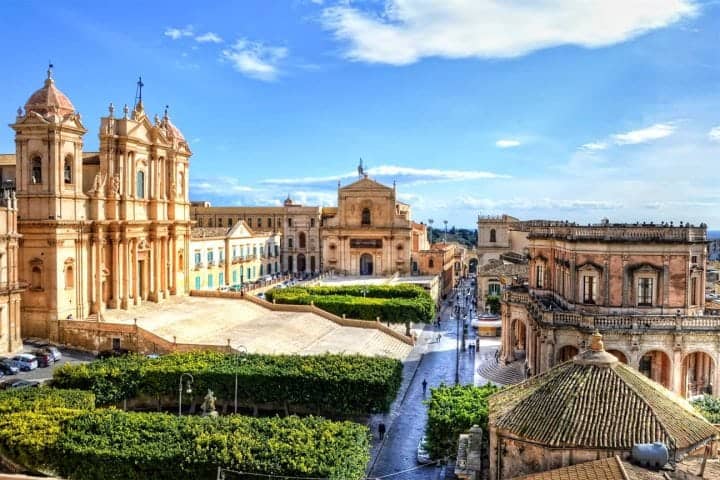 Depart Taormina and driven to enjoy the scenes of The Godfather movie. From the coastal road, rich of villas, flowering gardens, and picturesque villages, leads to the historical artist town of Savoca. In a private house in the village,

Bar Vitelli houses a collection of local artisans’ tools and photographs taken when Francis Ford Coppola shot scenes of The Godfather II. Stroll along the village’s main street past Santa Lucia and San Michele churches for a short view over the valley. Drive away.

We’ll find Forza d’Agrò, a charming little village over-looking the Arab-Norman castle of Capo Sant’Alessio. In 1990, Al Pacino and Sophia Coppola shot scenes here for The Godfather III. From the main square, a lane meets the circular steps that ascend to the Gothic-Catalan portal in front of the Church of San Agostino. Later we drive back to Taormina.

**Every effort is made to provide the tour as described below, however the itinerary may change due to situation beyond our control.

The Greek Theatre. The Roman Amphitheatre and The Paradise Quarry

Greek Theatre, the Roman Amphitheatre and the Paradise Quarry. The resulting park contains some of the most extraordinary monuments that classical antiquity has left us and, given their degree of interest and importance, has few equals elsewhere in Italy. (admission fee not included)

The heart of the city center, to visit the Dome. This delightful pedestrian square is home to the wonderful Cathedral built on the site of an ancient Temple of Athena as can clearly be seen from the original Doric columns that were incorporated into the building’s main structure. Also on this square is the beautifully symmetrical Baroque Palazzo Beneventano and the church of Santa Lucia, the town’s patron saint. Later to the colorful daily Street Market, which sells a fantastic array of fruit, vegetables, fish and meat.

Time at leisure for your independent lunch.

Starting back to Taormina the Cyclops Riviera (Riviera dei Ciclopi) is a 12-kilometer long stretch of the coast located north of the beautiful city of Catania that goes from Acireale to Aci Castello. This wonderful coastline was named after some legends about the huge rocks sprouting from the sea, (some of them even up to 70 meters high). In fact, there are different legends about these boulders all involving Cyclops Polyphemus, the giant son of Poseidon and one of the Cyclopes. According to a legend, Polyphemus threw these boulders in the sea to express his rage against Ulysses, whose story has been told by Homer’s Odyssey. Another legend tells that both a shepherd called Aci and Polyphemus were in love with Galatea, a nymph of the sea. Blinded by jealousy, Polyphemus killed Aci throwing a boulder on him. Galatea prayed the gods to give her beloved Aci back, so the Gods turned Aci into a river, which flows into the sea through the small beach where Aci and Galatea used to meet. Today, most of the towns that lie on this coast (Acireale, Aci Castello, Aci Trezza, and others) owe their names to Aci.

The coast and the nearby boulders are part of a protected area featuring great varieties of flora and fauna, beautiful sea floor and lush underwater vegetation.

Tour can be customized as it is private

Take the train from Taormina to Palermo and a private vehicle with your escort / driver you will leave for Monreale, which sits on a hill over looking the sea. In Monreale’s beautiful old town you find the world famous Norman Cathedral, which is a major attraction in Sicily. Construction of this magnificent masterpiece of Norman art kicked off under William II in 1174 and was finished a few years later. It is said that the Norman building was commissioned to undermined the power of the Archdiocese of Palermo.

On the outside, you can admire the beautiful doors, the elegant 16th century portico by Gagini and the richly decorated apse, covered in intertwined arches and polychrome lava and limestone inlays. On the inside, you will see its amazing set of mosaics on a golden background. The mosaics, climaxing in the large Christ Pantokrator image, were created between the 12th and 13th century and represent stories from the Old and New Testament. It is the largest complete cycle of the Byzantine tradition. The 11th century Benedictine cloister is also amazing. Inside you will marvel at the oriental fountain, surrounded by a four-sided colonnade.

After visiting Monreale you drive to Palermo where you enjoy a walking tour of the old town. Palermo reflects the diverse history of the region in that the city contains many masterpieces from different periods, including Romanesque, Gothic, renaissance and baroque architecture as well as examples of modern art. Perfect examples are the Norman Palace which is home to the Sicilian parliament and the Palatine Chapel from 1132, which is covered with glittering mosaics.

The city also hosts a rich vegetation of palm trees, prickly pears, bananas, lemon trees and so on. The abundance of exotic species was also noticed by the world famous German writer Goethe who in April 1787 visited the newly opened botanical gardens, describing them as “the most beautiful place on earth”. A favorite for many visitors is the Vucciria, which is a maze of small streets where vendors sell fresh fruits, vegetables and seafood.

The total tour duration will be approximately 7 hours due to either train ride or travel by vehicle.

All reservations are subject to terms and conditions of cancellation. No refunds are given regardless of weather on the day of your reserved tour.Tours are non-refundable for any reason including flight delays, ship delays, weather, or any type of incident on the day of tour. Food, Drink and entrance fees are not included unless specifically stated.